Just nine to twelve short months ago, interest rates were steadily climbing off the mat toward 3% and the path forward was on cruise control.  The primary debate among informed market observers seemed to focus on whether 2019 would see three or four more rate hikes to push the Fed Funds rate back to the 3.5% range, and a couple more rate hikes were getting penciled in for 2020 to push the key rate toward 4%.

After almost a decade of Federal Reserve action to constrict rates in an unprecedented effort to pull the US economy out of the 2007-09 recession, the worst since the Great Depression of the 1930s, the stimulus from the financial system was being removed.  Economic growth was very strong last summer with US GDP rising 4.2% and 3.6% in Q2 and Q3, respectively, assisted by the Tax Cuts and Jobs Act.  Employment data was robust with a sub-4% unemployment rate.  Inflation remained subdued at less than 2% but was feared to rise as economic growth improved.  The Fed Funds rate was set to continue rising by 25 basis points per quarter while the Fed’s balance sheet assets were running off by $50 billion per quarter.  The economy was said to be in a strong enough position on its own merits to support more normalized interest rates for the first time since the financial crisis.

Typically, that would be a favorable signal as interest rates are supposed to correlate with the underlying health of an economy – higher rates tend to signal better economic trends.  Better economic trends should, in theory, bode well for stocks.  While returns were quite healthy during the first nine months of the year as the broad market rose by 10%, the tantrum in the final quarter when the S&P 500 fell by 13.5% closed the year on a very sour note.  In hindsight, the cause was a combination of economic growth, primarily in foreign markets, beginning to slow, a simmering US-China trade war and the Federal Reserve remaining steadfast about hiking interest rates while tapering its balance sheet holdings.

Fast forward six months to today, the Fed communicated a sharp U-turn regarding the path for rates in January of 2019 and equities are back near all-time highs, despite slowing global growth trends, an unresolved trade war with the world’s second largest economy and perhaps an escalating risk of a war with Iran.  Meanwhile, the benchmark US 10-year Treasury yield has plunged from 3.2% last Fall to 2%, while the 2-year Treasury yield is 25 basis points lower at 1.75%.  So what in the world has happened to the yields offered in the bond market in the last year?

The growth slowdown on a global basis has caused central bankers in many parts of the world to reintroduce stimulus plans in tandem to bolster stagnant economies.  Mario Draghi, the head of the European Central Bank, just noted in mid-June that additional stimulus will be required to spur economies such as the UK, France, Germany, Switzerland, Italy and Spain.  Parts of the Eurozone and Japan actually have negative yields on their bonds.  With such scant yields in other developed economies, US bonds have looked very attractive on a relative basis.  With bond prices inversely correlated to yields, the influx of yield-seeking investors has continued to press US Treasury yields down to current levels.  It’s widely believed that a domestic rate cut is coming as soon as July.  But the question is how much good can rate cuts do now when the starting point is already so low with the Fed Funds rate sitting at just 2.25-2.5%?  For reference, the Fed Funds rate peaked at 5.25% last cycle in mid/late 2006 when the rate cutting cycle began, and it was at 4.25% when the recession began in late 2007.  Regardless, if a rate cut is forthcoming given slowing global growth, the yield on investments in the bond market may very well continue to migrate lower.   There are other reasons to own bonds – as a risk mitigation tool relative to equities which can be more volatile – but given the rapid price appreciation the income-generating capabilities of those instruments has become rather paltry. 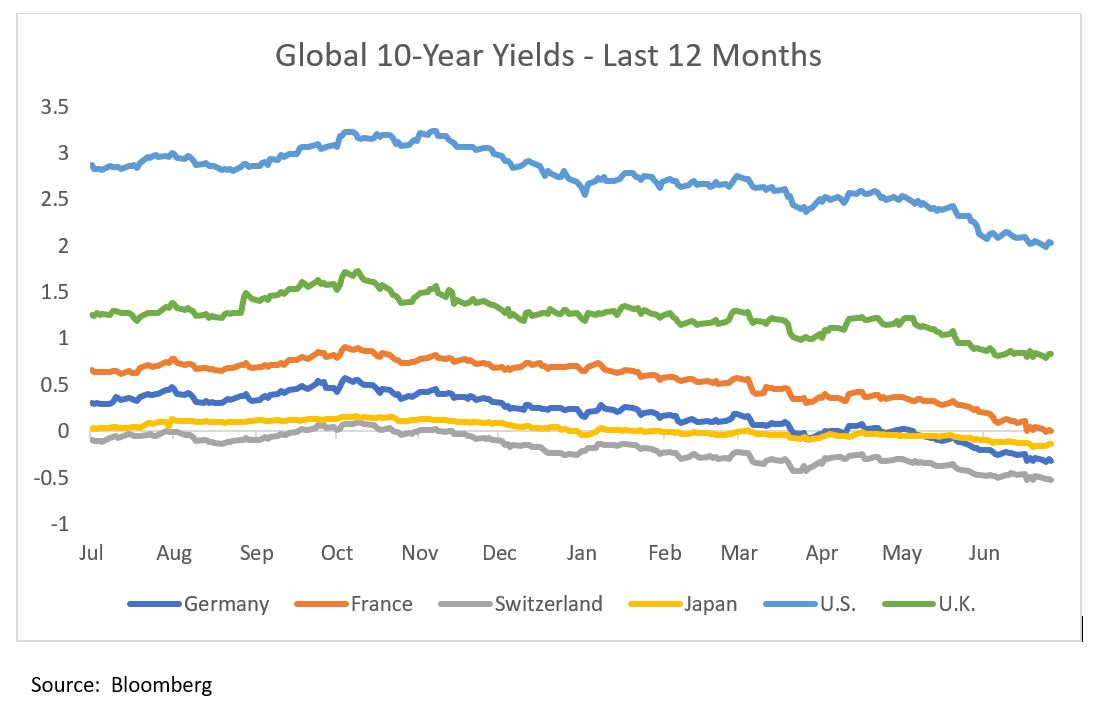